on and on and on 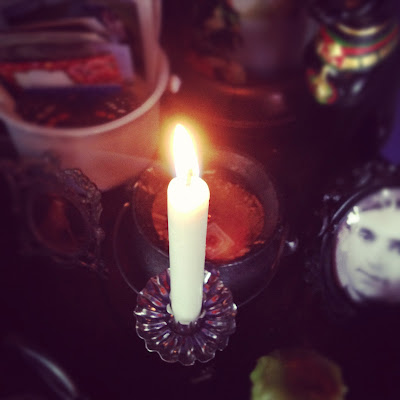 Someone passed away today that I was no longer close too. It came as quite a shock because she was only 29 and it was unexpected and as far as I know at this point in time natural.

I burned a candle with her name carved in it, covered in peace oil. The candle burned down and I thought of all the reasons of why I no longer hung out with her, how our lives were intertwined and how we ended up going our separate ways. The strange part of this story is I remember back in highschool how she would always say how she was not going to live past 30.

Now I realize lots of people would stand in the streets shouting “teen angst” to this comment, (especially since we were both goths) but the thing is I also remember her talking about things that had not happened yet that would later come true.

Hopefully she will move on to the next realm peacefully, I really don’t know how to feel about this whole situation. It’s just like mortality came and bitch slapped me in the face.

When the candle extinguished itself there was a nub left at the bottom, I have never had that before, when I burn them on my honey jar all that is usually left is a little bit of wick.

What could this mean? An unfinished life? A life taken too soon? Something that should have been done before she passed on? I feel like I am missing a piece of the puzzle here, perhaps I will find out more later on.